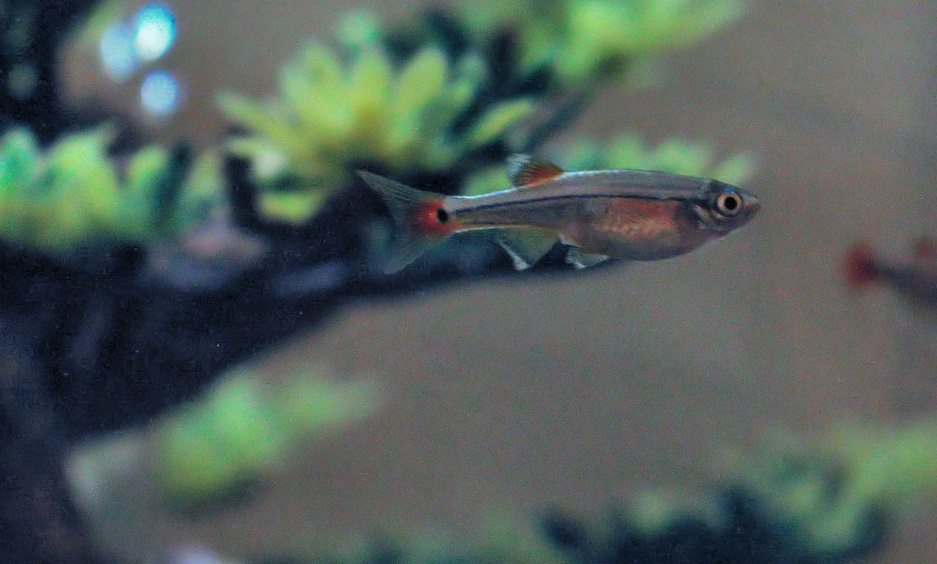 The White Cloud Mountain minnow is one of the all-time under-valued aquarium fish.

This species is one of the all-time under-valued aquarium fish. It is colorful, active, hardy, and easy to breed. Its primary drawback is that it is so small. If it grew to 3 inches instead of only 1½ inches, it would be the focal point of any community aquarium.

Keeping and breeding this species is very simple. There was a “joke” when I was young that said that the “secret” to breeding the white cloud was to have wet water and nothing in the aquarium that would eat the parents. In fact, it was not too far off of the mark.

If I was going to keep the fish, I would set up a species aquarium with four or five adult pairs in a 15-gallon aquarium with a heater set to about 72 degrees Fahrenheit. I would put in a light layer of gravel, just enough for the roots of bushy aquarium plants, such as Cabomba or Myriophyllum, which I would use to line both ends of the aquarium. I would add a few Java ferns to the background and a couple of low clumps of Java moss toward the center-front.

For filtration, I would use a sponge filter with a good air supply for filtration and water movement. I would feed the prospective adults a variety of live foods and dry flake foods, and I would add a small portion of live baby brine shrimp or sifted Daphnia every morning. Then I would sit back and enjoy the aquarium. After a wait of about four weeks, I would stir the bushy aquarium plants and look for baby fish. They should be there.

The above method should give a steady supply of young white clouds that could be raised in the aquarium with the adults or removed to a different aquarium where more food could be given to raise the fry at a faster rate. If I had a need for more fry, I would put in more Java moss, enough to cover the bottom to about 2 inches in depth and continue as before with the daily feedings. After three weeks, I would move the parents to a different aquarium that had been set up the same way.

Lastly, if I wanted a very large supply, enough to sell to a wholesaler, I would separate the males from the females for about a week. During this time, I would condition the prospective breeders on a diet of live foods and include daily feedings of grindal worms or chopped white worms. When I was ready to breed the adults, I would set up a series of 2- to 5-gallon aquariums, each with an airstone and heated water. The bottom of each container would be covered with a layer of Java moss, with one large, loose clump of moss that reached the surface.

Then, I would add a pair of adults to each aquarium in the evening, feed them with live Daphnia or brine shrimp nauplii each morning and leave the aquarium alone for two days. This generally gives the adults enough time to settle in and spawn. Be ready to start looking for the eggs in the evening when the adults are removed. Each female should produce between 200 and 300 eggs, all of which should hatch.

This should give me more than enough white clouds for anything I needed them for. There should be enough “infusoria” growing in the aquarium plants to supply the fry for the first day, but I would need a larger, steady supply for the four to five days it takes before the fry are able to eat newly hatched brine shrimp nauplii. Then I would need lots of baby brine shrimp to raise the fry to a salable size.

To tell you the truth, I probably wouldn’t go through the effort for mass-producing white clouds. Its a lot of work and the stores do not pay enough to make it worthwhile. In fact, if I did want to make a commercial venture out of them, I would set up a small pond and raise the fish outdoors.