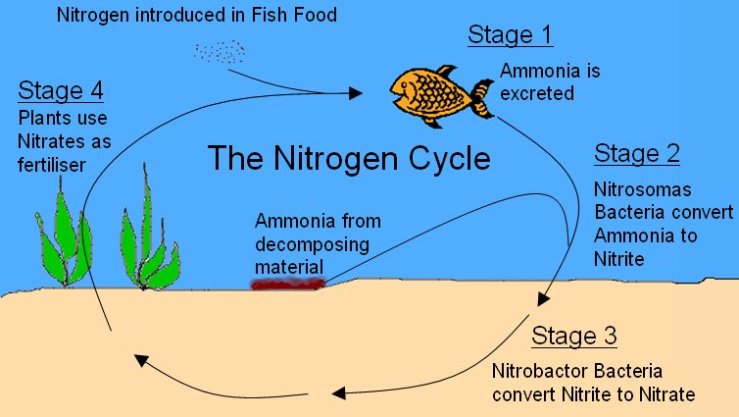 Setting up your first aquarium is a hugely enjoyable and exciting experience, and naturally, you will be tempted to fill it with all manner of pretty fish and plants as soon as you’ve put the water in. However, it’s essential that you take your time and learn exactly what goes on in the tank before you add its first inhabitants. Overloading it with too many fish at once can poison the water and lead to sudden fish loss – not at all what you want in your first couple of weeks!

When Does the Nitrogen Cycle Begin?

Before the tank is considered “mature” it needs to go through what is known as the “nitrogen cycle”. This cycle begins as soon as you add your first fish and they begin to produce waste. This waste produces nitrites which are poisonous to your fish, so it’s essential that the levels do not get too high. Luckily nature offers a remedy in the form of “good bacteria” that is naturally present in the water and breaks the nitrites down into a safer compound known as nitrate.

Allowing the Good Bacteria to Develop

The problem, however, is that this good bacteria takes time to grow and can only cope with breaking down small amounts of nitrite at a time. So if you overload your tank with fish too quickly the good bacteria will not be able to break down the amount of waste they produce. The maturing process can take anything from 6 weeks to 6 months, so it is very important to be patient and add small numbers of fish at a time.

It is possible to get the process going before you add any fish at all. Put a few flakes of food into a fine stocking and add this to the tank for a few days. As the food decomposes the bacteria will begin to grow and break it down. Take care not to put too much food in, however, as again you may end up with more waste than the bacteria can cope with.

Testing the Water in your Aquarium

Get yourself a good testing kit and test the water on a daily basis to make sure the nitrite levels are not getting too high. If they are, you must do an immediate water change to help reduce them. Most testing kits will tell you what levels are considered safe for the size of your tank.

Unfortunately, it is not uncommon to lose a few fish in the first couple of weeks. So perhaps hold off on buying those expensive gold rams until you are confident your tank is healthy! Hardy fish like neon tetras or zebra danios are ideal as starter fish as they aren’t as fussy about water conditions as some of the more delicate species.

Remember; be patient, pay close attention to the water conditions, don’t overload the tank or feed your fish too much and you should have a happy, healthy tank within a matter of months.

How does the Nitrogen Cycle happens in Nature?

In the natural world, harmful ammonia & nitrite are constantly converted into less harmful nitrates, which in turn is used by plants and algae for food. Biological Filtration replicates this process in the aquarium.

The cycle works like this: Fish and Invertebrates excrete waste which is added to the ammonia produced by decaying food and organics. The ammonia is very toxic to livestock. They would certainly die if there wasn’t a way to get rid of it. Next, nitrosomonas bacteria convert the ammonia to a still dangerous but less toxic nitrite. Then another bacteria, Nitrobacter, breaks down the nitrite to a safer substance nitrate. Which then is used as food by plants and algae, which are consumed by fish and invertebrates and the cycle begins again.