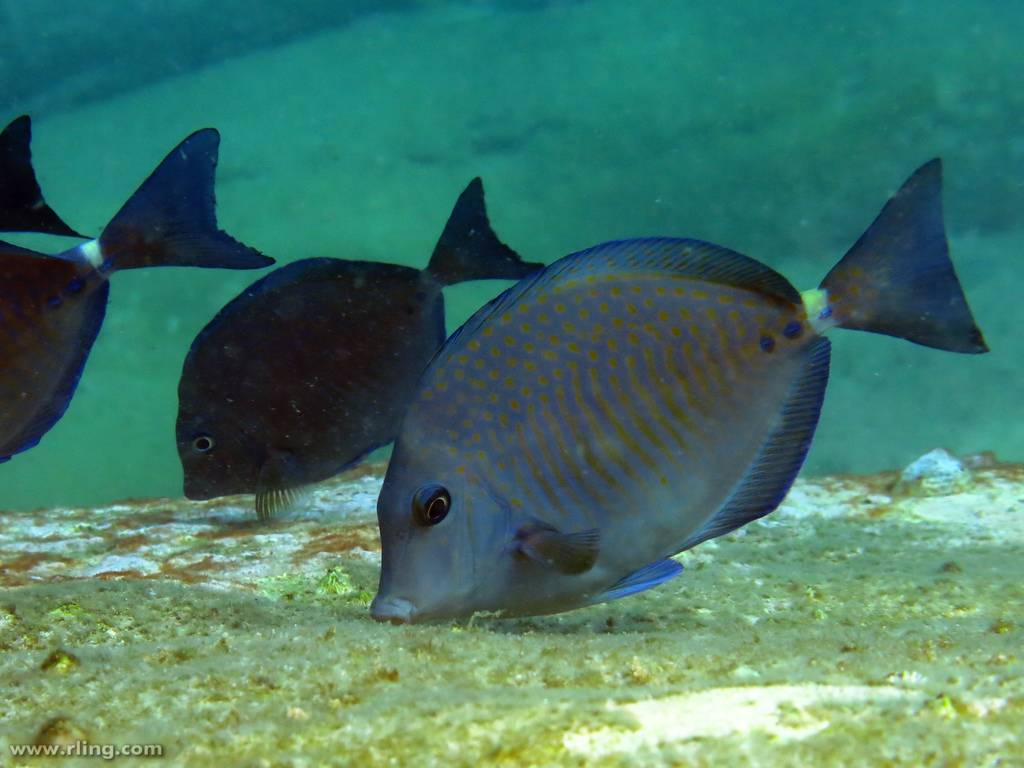 The spotted surgeonfish, also called the yelloweye kole tang, is a fantastic fish for a tropical reef tank, especially since this fish is so adept at algae control.

The spotted surgeonfish (Ctenochaetus strigosus) is a fantastic saltwater aquarium fish known for its algae-eating prowess. Like other members of the genus Ctenochaetus, this fish will spend its days scraping algae and detritus off the substrate. A relatively easy fish to keep if the proper husbandry is followed, the spotted surgeonfish is a peaceful fish that will add both interest and beauty to a marine aquarium.

A Bristletooth Tang from the Eastern Central Pacific

Indigenous to the Eastern Central Pacific around the Hawaiian Islands and Johnston Island, the spotted surgeonfish can also be found in the Western Central Pacific in waters off Australia. In the wild, this species may reach over 14 centimeters in length, but it often remains smaller in the aquarium. It is a member of the group of fishes known as bristletooth tangs or suregonfishes.

The genus name, Ctenochaetus, literally translates as bristletooth, and if the aquarist looks closely at the fish’s mouth, he or she will see that it protrudes from its face. This makes it easy for the spotted surgeonfish to use its flexible, comb-like teeth to scrape algae.

The spotted surgeonfish is, as already mentioned, a peaceful fish, and it should be added to an aquarium with other peaceful community fishes. Be careful with keeping this fish with other fishes from the Acanthurus family, as it may be bullied.

Many aquarists do keep the spotted surgeonfish in a reef tank without problems, as this species usually leaves sessile invertebrates (e.g., ornamental corals) alone. It has been noted, however, that an underfed spotted surgeonfish, as well as other fishes from this genus, may pick at coral polyps.

Feeding a spotted surgeonfish is generally not difficult, although in some cases, it can be challenging to initially wean the fish onto a captive diet. The aquarist should ask to see the fish eat at the local fish store before purchasing it. If the fish is purchased online, ask the vendor to hold the fish until it is eating.

If a newly acquired spotted surgeonfish is not eating, the aquarist should try feeding fresh algae like ogo (Gracilaria parvisipora), which can be readily purchased at many saltwater fish stores and online.

Often purchased for its algae-eating prowess, the spotted surgeonfish should start picking at the substrate in the aquarium once it is acclimated. In addition to the algae and the small invertebrate life frequently found in the algae, the spotted surgeonfish should be offered a varied diet including dried marine algae (nori), spirulina flakes (or other foods formulated for herbivores), meaty bits of seafood, and other foods specially formulated for omnivores. It is wise to soak flake food in a vitamin supplement like Selcon, as this will help the spotted surgeonfish fight off parasitic infestations and offer balanced nutrition.