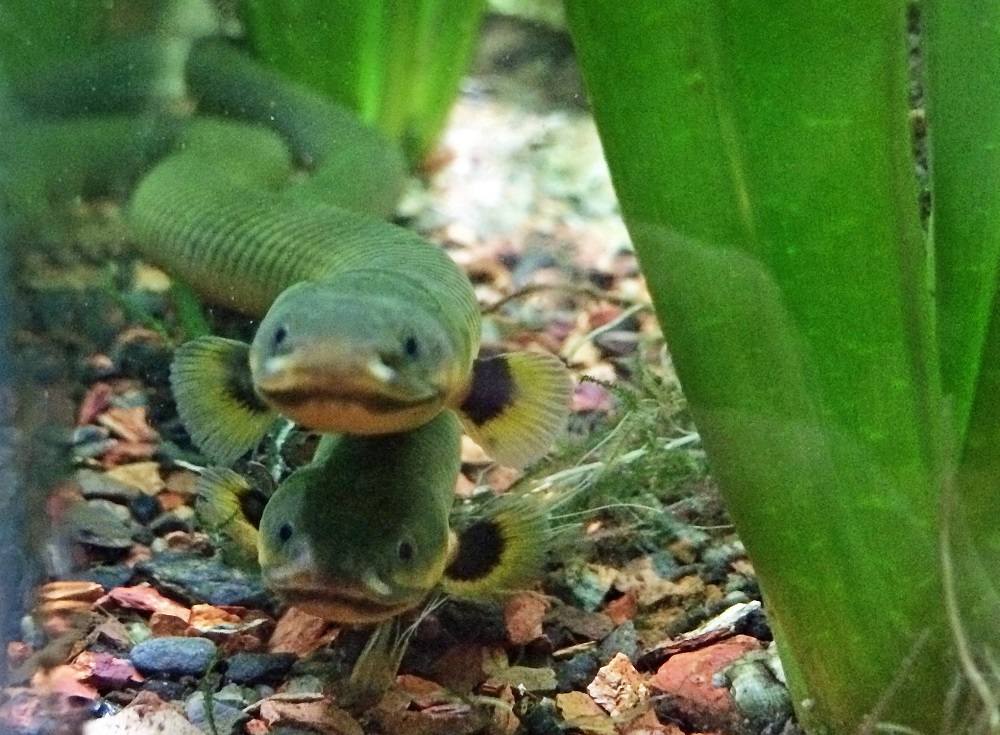 Ropefish, or Erpetoichthys Calabaricus, also known as the reedfish or snakefish, make attractive community members in freshwater aquariums. They are fun to observe, easy to keep, and are relatively hardy fish. Anyone planning to keep these fish should have a secure aquarium lid as they are known to escape from their enclosure. Very small fish should be avoided as tankmates lest they find themselves on the dinner menu.

In terms of evolution, Ropefish are very old, rivaling even such ancient fish as Sturgeon and Lungfish. Their anatomy and behavior exemplify their status as “living fossils.”

They have retained certain characteristics of their ancestors not found in most modern fishes. A swim bladder is present but it is divided into two sections, a small left, and a larger right section, and both of these sections lie in a position similar to the lungs of higher vertebrates, and indeed it is used as an accessory breathing organ. In fact, if they are not allowed access to an air supply they will drown, although they still have fully operational gills.

Since they grow to a sizeable length, Rope fish should be provided with the largest aquarium possible. An adult specimen should not be kept in anything smaller than a 55-gallon aquarium with plenty of open swimming space. Though they are primarily nocturnal, they tend to be fairly active swimmers once they become comfortable in their tank (1).

A soft, fine-grade substrate should be provided so that the Reedfish can burrow and rest on the bottom without damage to its scales.

Rope fish also tend to be fairly timid and, at times, reclusive. They should be provided with hiding spots so that they can conceal themselves during the day and escape from any other fish that might pester them.

Remember, Rope fish are known for jumping out of tanks, so a secure lid is a necessity when it comes to keeping these fish.

In the wild, Ropefish can sometimes be found in mildly brackish water such as river deltas. For this reason, they are often classified as brackish water fish. But compared to many other brackish species, Ropefish do not tolerate high salinity levels. It is advisable not to surpass a salinity or specific gravity of 1.005.

This fish can be kept in mildly acidic to neutral water with a pH range between 6.5 and 7.5. The temperature of the water should be held constant between 71 and 84 degrees Fahrenheit (22 – 28 degrees Centigrade).

Ropefish are carnivorous with a preference for meaty and live foods. Bloodworms and other small worms are eagerly accepted and readily available from local pet stores. Small chunks of shrimp, fish, squid, or earthworm work equally well. Be mindful that this species are piscivorous and will eat small fish, shrimp, and snails if they can locate them.

The greatest challenge when it comes to feeding Rope fish is ensuring that they are actually eating. Because they have poor eyesight and are relatively slow (and usually hiding), they tend to be the last to locate food during feedings. Fast, hungry fish almost always beat them to the meal. To combat this problem, either target-feed the Ropefish and place the food directly in front of him or feed the aquarium at night sometime after the lights have been turned off. This will give the Ropefish better odds of locating food without being out-competed.

++ How long can your fish survive without food?

Ropefish are a fascinating addition to freshwater aquariums and are entertaining to watch and study. They certainly appeal to those who enjoy snakes and eels, yet possess a unique look and behavior. With proper care and conscientious feeding habits, Ropefish can live for years as undemanding and intriguing specimens.