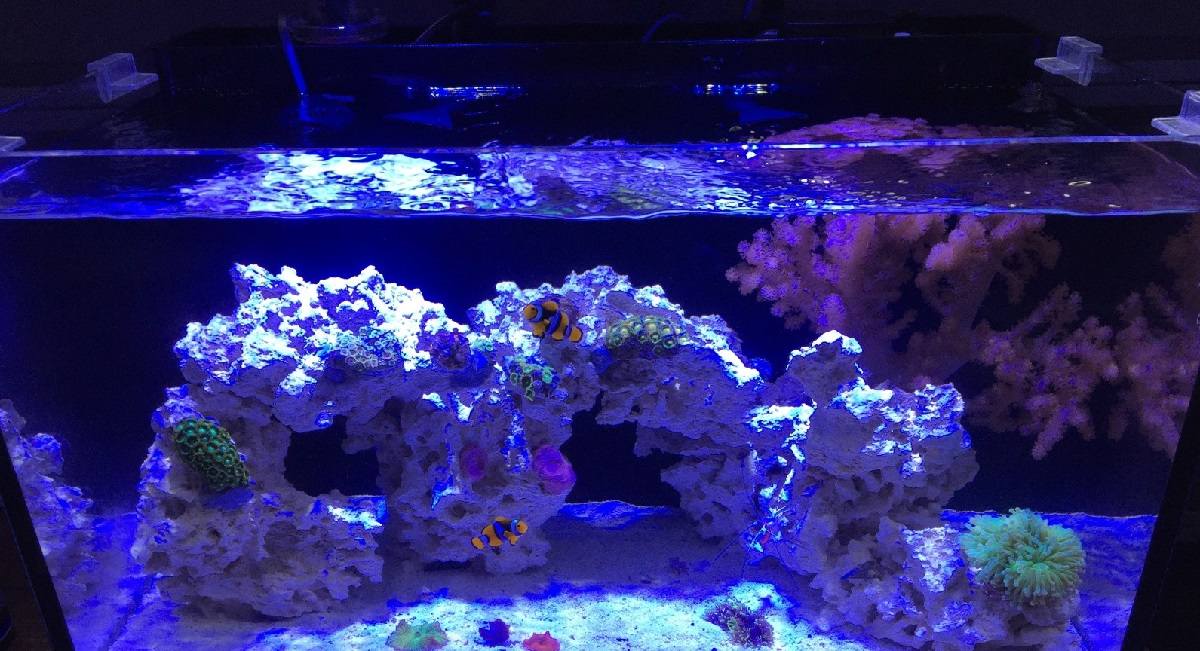 In all aquariums, there are sources of nourishment and growth. Freshwater aquariums usually house fish, and thus a major portion of the nourishment of the living organisms in the aquarium comes from the food that you put in the aquarium. For reef aquariums, this is not necessarily the case. The food you put in the aquarium does provide energy that the species in it need, but lighting plays a much larger role than in fresh and saltwater aquariums. The invertebrates and reef growth thrive on the correct lighting. Slight changes in the lighting can have large effects on the health of your reef structure. So, what is ideal, and what basic rules do you need to obey? Below I will outline some of the basic guidelines.

What type of light is best?

The first thing I should say here is that you shouldn’t keep the aquarium in direct sunlight. It will cause algae growth to occur rather rapidly. Basically, there are two particular colors of light that are very important to a reef aquarium: blue and greenish-yellow. Most aquarium bulbs leave out the red portion of the spectrum. This is due to the fact that it tends to promote micro-algae growth which is not good for the reef aquarium.

This is why normal “house” bulbs should not be used. They do not omit the portion of the visible spectrum which is undesired. You must buy aquarium bulbs. Generally, a mixture of full spectrum and actinic blue bulbs is desired. These bulbs are similar to the basic fluorescent bulbs found in many households. For those with larger aquariums, you may find that you need to use metal halide lighting to produce the intensity of light needed, but be aware that these types of bulbs generate a great deal of heat.

How long should the lights be on? The general rule is 8 to 9 hours. Leaving lighting on for more than 8 to 9 hours will have some ill effects on the aquarium. In short, it will promote algae growth. The easiest way to keep the number of hours of lighting constantly is to use a timer. These are not very expensive and are a great investment.

What type of configuration?

Most reef aquarists end up making their own light canopy. This is usually due to the need for additional lighting relative to the basic canopies which come with aquariums. There are too many configurations to discuss, but it is important that one calculates the number of bulbs needed to produce the 3 to 5 watts of light per gallon. This will determine the number of bulbs you need.

The next step is to determine the number of ballasts the canopy requires. Two major ballasts are available: the HO and VHO ballasts. Simply put, VHO ballasts are able to run more bulbs and are often used for larger aquarium lighting systems, where a greater number of bulbs are required. Also, don’t forget the heat that the lighting unit will produce. Small cooling fans are almost always needed, so don’t forget to incorporate several into your canopy if you make one.

These are the basic guidelines for reef aquarium lighting. By following them, you will increase the health of your reef aquarium, and promote the growth of healthy organisms. Lighting is one of the two most important components of a reef aquarium (along with water quality) and should be carefully planned out to ensure that it is used properly.