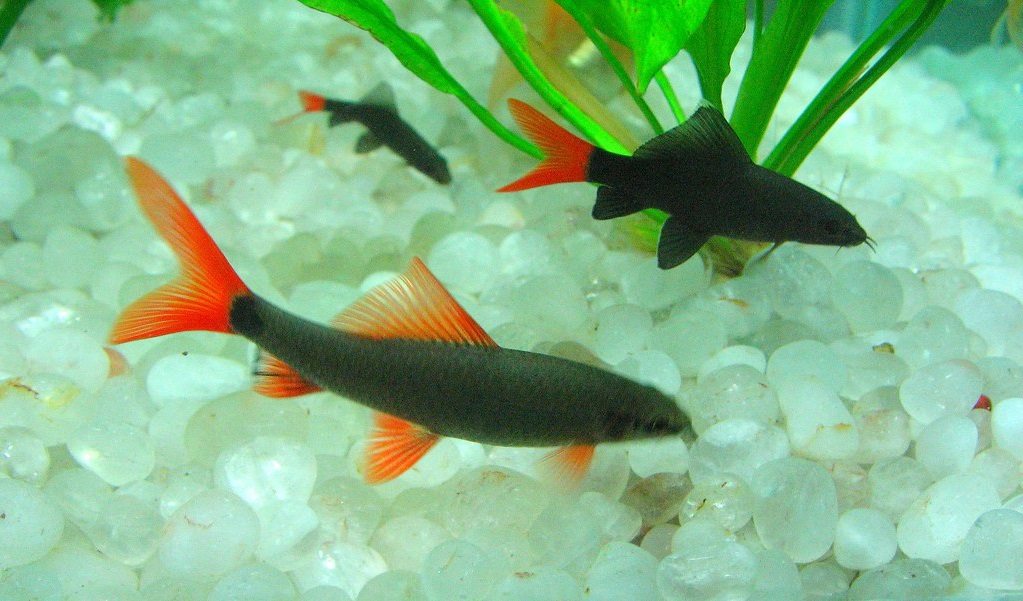 Yes, it is still safe to go back into the water! This fish isn’t a great white! It’s not even one of those great black sharks that I have told you about! This fish doesn’t have a mouth full of teeth, but it can still be a tiny terror in your tank! It’s one of the most popular and attractive freshwater sharks available in the hobby: the Red Tail Shark!

It’s easy to see where the red tail shark gets its name. While the body of this fish is black, the tail of this shark is a striking, bright red. In some cases, the red tail shark’s black dorsal and pectoral fins may even be tipped with white. Usually, these white tips will fade as the fish matures, as most of these white-tipped red tail sharks are juveniles.

Some red tail sharks may also be found without a red tail! I have seen and purchased red tail sharks with white or tan-colored tails. At first, I thought these sharks were a new strain of red tail shark, but I have since found out the truth. These red tail sharks without the red tails are usually sick or stressed out, and their tails have simply lost their color! In some cases, even some older specimens’ tails may fade in color.

The red tail shark is a native of Thailand, although most of these fish are now raised on fish farms. It is actually believed that the red tail shark is extinct in the wild due to the fish’s popularity in the pet stores! In the red tail shark’s natural habitat the fish swims in fast-flowing streams, canals and in overgrown waterways with rocky bottoms and strong currents. When setting up a home aquarium to house red tail sharks, these conditions should be taken into consideration.

The red tail shark will be compatible with such fish as gouramis, barbs, danios, rainbows, bala-sharks, iridescent sharks, red finned cigar sharks, pictus catfish, swordtails, silver dollars, angels, most loaches and even some types of cichlids. The red tail shark will not harass any of these fish, but they will defend their territory from any intruding fish, usually just chasing the trespassing fish away. It is even believed that the red tail shark will act aggressively to other fish if they have red fins, apparently believing the fish to be another type of red tail shark! Because of the red tail shark’s aggression, many hobbyists choose to keep this fish with larger, equally aggressive fish, including cichlids, or in a red tail shark only aquarium.

The red tail shark is not known as a good breeding fish for the home aquarium, but it is remotely possible to breed the sharks. It may be a little difficult to distinguish between the male and female red tail sharks. The females are often slightly bigger and in some cases plumper. The easiest way to tell the difference between the two sexes is by looking at the red tail shark’s dorsal fin. The males usually have a more pointed dorsal fin, while on the females the rear edge forms a right angle.