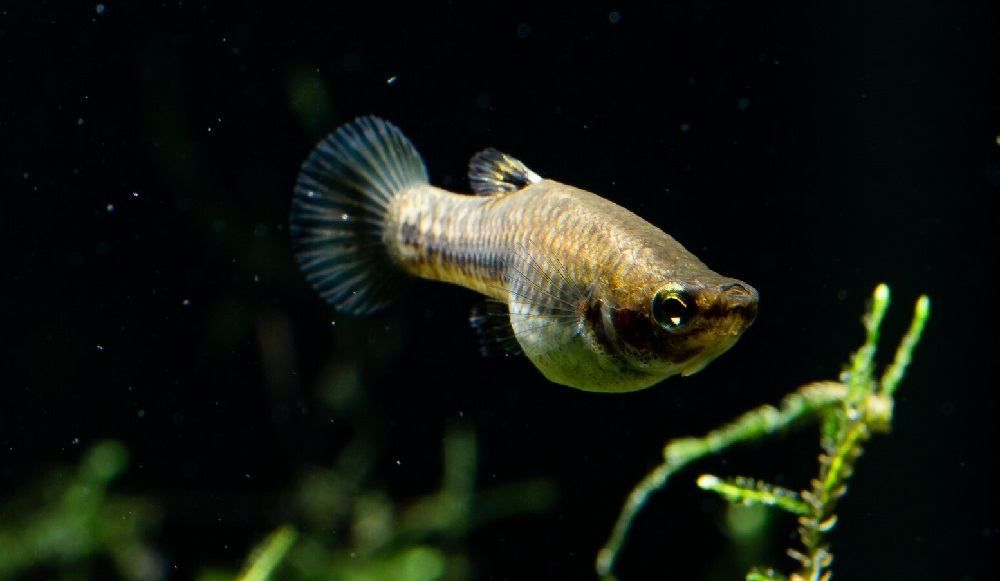 Usually, aquarists think of aquarium fish as those that come from some exotic locale. Not all fish available in the hobby are found in the tropics. Some of them come from right here in the United States. The plant-choked roadside ditches, canals, and swamps of the southern U.S. from the Carolinas to Louisiana are home to one of the smallest vertebrates on the planet: the least killifish (Heterandria formosa).

Adult females can grow to more than an inch, but adult males never get that big. Even though its common name is “least killifish,” it is actually a livebearer. This fish behaves in a similar way to many native killifish species, schooling near the surface and staying in shallow water, ready to grab food or dive for cover. Heterandria formosa is easy to care for and has been popular with aquarists since the 19th century. This species was among the first fish bred in aquaria before electricity, and it is still popular today.

For several years, male least killifish were considered to be the smallest vertebrate on the planet. As we learned more about the microvertebrate around the world, that title eventually passed to a marine goby then to a cyprinid from Asia, and most recently, a tiny frog that is barely larger than a week-old H. formosa fry.

Due to its small size, the least killifish has evolved with an interesting reproductive strategy. Like many livebearers in their family (guppies, swordtails, mollies, and others), females can store sperm packets from one mating for several months before using them to fertilize a batch of eggs. But this species takes this one step further. Instead of an entire spawn developing all at once and being born at the same time, the least killifish uses a strategy known as superfetation. The female provides almost all of the nutrition to her developing embryos. Because the female’s womb is so tiny, there is only room for one or two embryos at a time to fit near the birth canal. These are the most developed embryos ready for birth. The rest are lined up singly or in pairs in an almost assembly line fashion. The most developed are born first. Then the next one or two move up, finish development and are born a day or two later. This process continues for up to 10 days. This amazing breeding strategy allows these tiny fish to produce a batch of up to 18 or so relatively large fry capable of caring for themselves on birth.

The least killifish is adaptable to various water conditions, and this adaptability has allowed it to colonize a wide area. This species is found in everything from blackwater swamps to hard-water springs to brackish marshes. Because it is so adaptable, the aquarist really doesn’t need to do anything special to get the water “right.” The least killifish should do fine in your local tap water once the chlorine or chloramine is removed. It is a temperate fish, which means it can tolerate cool water in winter and warm water in summer, so no heater is needed.

Filtration is optional with this tiny fish. A small internal canister filter or a sponge filter will be perfect if you wish to use some type of filter, but like those successful aquarists of the pre-electric 19th century, many aquarists who keep the least killifish do not use any filter at all, relying on water changes and live plants to maintain water quality.

The least killifish is an omnivore with a love for tiny live foods. In the wild, it is well-known for its love of mosquito larvae — so much so that in some places, this species is called “mosquitofish,” though in most areas this name is usually reserved for Gambusia species. In our aquaria, the least killifish will eat finely ground flakes, micropellets, live foods (newly hatched brine shrimp and microworms) and frozen foods (baby brine shrimp and copepods). Even newborns will greedily eat these same foods.

Due to its small size, Heterandria formosa should be kept in a species tank. A group of least killifish will make ideal residents for nano tanks: A healthy colony can be kept in a tank as small as 5 gallons. With tanks this small, it is important to watch water quality, as it can change quickly for the worse if something goes wrong. It is important to give them large regular water changes. They feel more comfortable with some cover close by, and they will spend more time in the open if they know there is a place for them to hide in if danger threatens. This is most easily provided by live plants, such as java moss, Najas grass, Java fern, and other similar plants. In addition, live plants will help to maintain good water quality and will give the fry a place to hide and graze, as the surface of live plants will provide them with an almost unlimited amount of area to hunt over for microfauna between meals.

The fry are large enough at birth that the adults will usually ignore them. At most, a large adult female may chase them into the plants if she is really hungry, but actual predation of fry is rare. If you feed the adults well and maintain water quality, they will do what comes naturally, and pretty soon you will have a healthy colony. With a small tank, it is important to keep the colony stable in size by regularly removing fish. Fortunately, they are as popular today as ever, and you can usually easily find homes for them with members of your local aquarium society.

Even better, if you have built up a good rapport with the owner of a local fish store, you will likely be able to trade them for food and other supplies. If you reach this point, congratulations! You’ve completed another successful adventure in fish breeding!