Keeping Clams on the Reef Tank 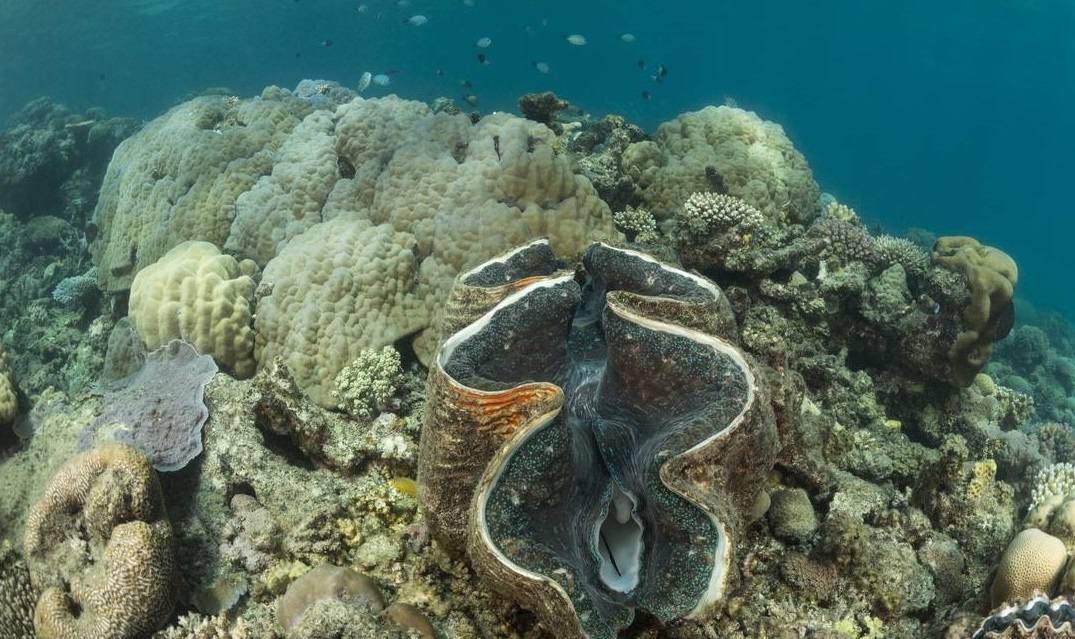 With well over 15,000 different species of bivalve mollusc known to science, the marine aquarist might reasonably have expected that a wide and varied selection might be available to the aquarium trade. Unfortunately, this is not the case. Granted, a fair proportion are not to be found in the tropical oceans, but of those that are, some of the names will be quite familiar (if only for culinary reasons!), such as clams, oysters, mussels, cockles and scallops.

Bivalve mollusks are so-called because each species possesses an inhalant and exhalant siphon arrangement by which the animal draws in water, filters it for food particles, and then expels it. Having said that, some species make no clear distinction between siphons which may be fused together. Other common physical characteristics include a pair of symmetrical, hinged shells, held together by two powerful muscles, known as the adductor muscles.

Bring in the Clams

Clams are an ideal example of the bivalve mollusk and are familiar to practically everyone. They do not possess a head in the accepted sense of the word but there is a pair of large gills that allow the animal to breathe, whilst also acting as a food filter. These gills can often be seen through the large slitted opening – the inhalant siphon – in the fleshy mantle.

Water is drawn in through this opening, passed over the gills and any food particles are trapped on a sticky mucus layer. Once trapped, tiny beating cilia transfer the food to the mouth and the treated water is passed out through the smaller exhalant siphon. However, this feeding strategy is not the only one adopted by the clam.

++ The Best Clams to Keep on Your Tank

The fleshy mantle is home to symbiotic algae known as zooxanthellae and can provide vital nutrients where suspended food particles are short supply. It is this very alga that provides the mantle with its own distinctive coloration and patterning, making the clam so attractive.

Most clams possess a wide range of colors that leave many other invertebrates looking drab. Blue, green, brown, grey, orange, yellow, gold, purple and red are all be found, with some colors more predominant than others.

It is often misunderstood that coloration and to some extent, patterning alone is a reliable indication of species, but positive identification is not quite that simple. Scientists tell us that the only dependable method of classification lay in the study of the shells (preferably after the flesh of the animal has been cleared away).

Fortunately, certain identification is of little consequence to the marine aquarist, for it is the combination of color and pattern that hold the appeal, rather than the scientific nomenclature.

Clams and other bivalves often find themselves in areas of strong water movement and consequently have devised several methods to prevent being swept away in the current. Foremost is a gland situated at the base of the animal which produces extremely strong elastic fibers that can attach to any permanent substrate e.g. rocks, etc.

The gland is called the byssus gland and naturally enough the threads emanating from it are known as byssus threads. Biologists know the whole ‘root-like’ configuration simply as the byssus.

Byssus threads are often to be seen trailing from a newly removed clam and can prove a dangerous source of infection if the animal is not detached properly. A sharp razor blade or scalpel must be used to cut the threads cleanly at the point of attachment, not close to the flesh of the animal. Merely pulling the clam away can cause irreparable damage to delicate tissues and must be avoided if long term success is to be achieved.

In common with other bivalves, clams also have the ability to extend a large powerful muscle known as a ‘foot’. While many other species use this device to move about or burrow deeply into the substrate, clams prefer to reserve its use for movement or temporary attachment, rather than for any burrowing activity.

It has long been a favorite ploy of film directors to depict giant clams trapping a diver’s foot within its grasp. These scenes have led many to believe that clams are dangerous, even predatory creatures. Like most things that come from tinsel-town, facts were never allowed to get in the way of a good story!

In reality, there are a few (but only a few) grains of truth that fuel this myth and warrants further attention. The mantle is edged with light receptors, seen as small black dots and these react to passing shadows or nearby movement, causing mainly younger specimens to swiftly withdraw their mantles and close their shells tightly together.

Clam flesh would make a very acceptable meal for many predators and such protective measures make it almost impossible for most hunters to gain access. Having said that, the shells of the Giant Clam (Tridacna gigas), which may grow to over 1 meter in length, are nearly always fused to adjacent rocks and incapable of closing fully, or with any speed for that matter!

Clams such as this are often very old and the mantle is tough and unappetizing, even to the hungriest of prospective diners, so the importance of closing the shells fully becomes less imperative with age. Therefore, the likelihood of any diver being held by a giant clam is remote to say the very least!

A few bivalves are hermaphroditic but the vast majority, and all clams, have separate sexes. Although males and females are not easily identified, except at spawning times, this knowledge is useful to semi-wild farms that breed bivalve specimens for both the aquarium and food trades.

The importance of such farming cannot be underestimated as the food trade in these creatures account for billions of dollars every year and wild collection could not sustain such a massive demand. It has to be stressed here that the aquarium trade accounts for a minute proportion of this trade by comparison.

If it were not for a difficult larval stage, requiring specialized rearing techniques, the marine aquarist could possibly raise clams and other bivalves within the aquarium; so far, sadly, this has proved almost impossible to replicate.

Fortunately, several specialized ‘clam farms’ now exist to supply the aquarium trade exclusively. Animals from these sources are of generally high quality and much in demand by wholesalers. Marinists are urged to request them where possible.

Owing to the symbiotic algae within the mantle, moderate to intense illumination is necessary. A high position on the rockwork to bring the clam closer to a light source is quite acceptable, although the location should be secure to prevent toppling and likely damage to itself and other corals. Careful consideration must be given to positioning as clams attach themselves with the byssus very quickly will be difficult to re-locate after a few days. Strangely enough, the proximity of stinging hard corals and anemones seems to have little effect but all the same, enough space must be allowed between species.

Given optimum conditions, growth is slow but steady. The process might be assisted by the maintenance of high water quality, elevated levels of calcium to aid shell growth (440-450ppm) and intense lighting by metal halides. Fortunately, clams are very long-lived and resistant to temporary dips in water quality, making them ideal candidates for reef-keepers at practically all levels of experience.

As a rule, clams suffer from two main health problems, both of which are easily avoided by the conscientious marinist. Firstly, poor environmental conditions (mainly water) or bad handling (constant re-location), causes the adductor muscles holding the two halves of the shell together to degenerate. As a result, they detach and the clam begins to ‘gape’. Deterioration is usually very quick and the dying animal must be removed to prevent wide-scale pollution.

Secondly, bristleworms have a tendency to invade the creature by way of the siphons and begin to devour them from within! Consequently, regular removal of bristleworms using proprietary traps must be carried out in tanks where clams are housed.

When choosing a clam, make sure that the mantle is fully extended and as colourful as possible. Pale, insipid specimens are best avoided. Inspect the base of the animal and discard those where the shells are not permanently joined, or where the area around the byssus is swollen or protruding masses of threads (indicating frequent re-location). The clam should shut vigorously in response to nearby movement such as a hand shadow passing over it. A sluggish or non-response to such actions could indicate problems in the nervous system.

Most clams require very little in the way of particulate feeding where the lighting is sufficient. Indeed, the addition of liquid foods may pollute the water very quickly. Where fish are maintained and fed in the same aquarium, the small number of juices from frozen foods can prove very beneficial to the clams which provide a useful service to the system as a whole by removing this unwanted load on the filters.

Growth and population dynamics of the giant clam Tridacna maxima