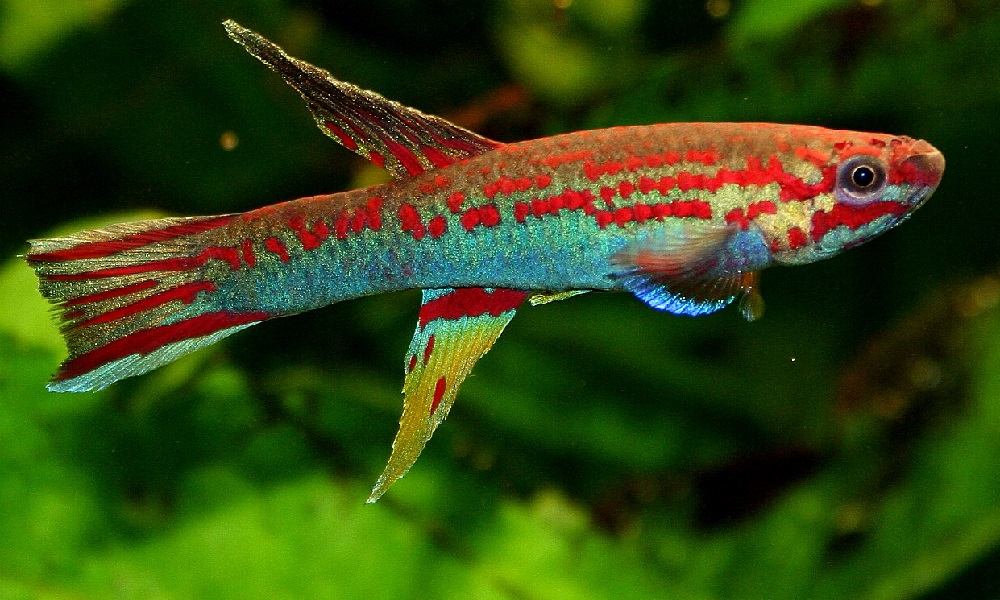 Killies really should be more popular in the hobby. For the most part, they are undemanding, require little space, are easy to care for, are beautifully colored, and many make great community tank fish. Some killikeepers will shudder at that last comment, but I’ve found it to be true with dozens of species over the years. The colors of the males are unlike any other fish — freshwater or marine. Many species sport reds, blues, yellows, greens, and other colors in abundance. They are active fish, and males of many species will spend all of their time right out in front, showing off their colors, displaying for one another or for the females, and waiting for a meal.

The major drawback to killies is that they are hard to find. Most commercial farms will not work with them, as they are labor-intensive to breed (compared to most commercially bred fish) and not as productive as the bread-and-butter fish that they produce in large numbers. Another drawback is that killie females are generally drab — but this is not so for this month’s fish, the goddess killie, which is named after the Greek queen of the gods, Hera.

Because killies aren’t often found in shops, you might have to do a bit of searching. Fortunately, killies ship well and killikeepers are usually willing to encourage a budding killikeeper. You can find more like-minded souls at your local aquarium society, a local or regional Killie club, through online auction sites or by joining the American Killifish Association.

Males of most Aphyosemion species are stunning, and the male A. hera is no exception. What makes these killies stand out is that females are also colorful. Female killies are usually fairly drab, with maybe a few red or black spots. Female A. hera, however, have a black lateral stripe that runs from the lips to the base of the tail, and they have a lemon yellow belly that really stands out.

Goddess killies are small fish. A really big male will top out at about 1.25 inches, with females a bit smaller at just a hair over an inch. In addition,  they live in minuscule bodies of water just a few inches deep, making them perfect residents for nano tanks. In fact, most killikeepers maintain them in pairs in 1- to 3-gallon critter tanks or in groups in 5- to 10-gallon tanks. As part of their natural behavior, they jump well and use this method to move from one small body of water to another. This behavior is hard-wired, and they remain excellent jumpers even after multiple generations in captivity, so make sure that their tank is covered securely. Even a small hole for air line tubing may allow an adventurous fish to go “over the wall.”

When it comes to water parameters, goddess killies are not demanding. The pH should be 6.5 to 7.5 and the total hardness less than 250 ppm (parts per million). If you have really hard water, add some peat extract and maybe even use up to 50-percent reverse-osmosis water, though this is rarely needed.

Feeding isn’t much of a problem, either. Killies are surface-feeders that instinctively strike at things that land on the surface. In the wild, this usually means an insect dinner. In captivity, the goddess killie will take high-quality flakes and pellets, which can serve as a staple diet for them. But to be in condition for spawning, they need to have live foods (fruit flies, mosquito larvae, confused flour beetles, Grindal worms, Daphnia and brine shrimp) and high-quality frozen foods (brine shrimp, small bloodworms).

There are almost as many ways to breed killies as there are killikeepers. I have found a method that works well for me, and I use it for all of the plant-spawning species. Killikeepers call it the “permanent method,” and my method is a version of this. Set up a 2.5- or 5-gallon tank with a small sponge filter, a light, a clump of Java moss and several small stem plants (Cabomba, Najas, Myriophyllum) floating freely in the tank. Gravel is optional. The filter is optional, too, but it does help stretch the time between water changes, and the bubbles serve to break the surface tension.

Add a pair to the tank and feed them two to three times daily with an assortment of the live foods mentioned earlier. Usually, you will see courting activity the first day. This will continue the entire time the pair is together. After five to 10 days, remove the pair and leave the tank alone. Start looking for tiny dark-colored fry swimming among the plants near the surface at about 14 days after you first added the pair. More fry will appear on a daily basis.

As soon as the first fry appear, it is time to start feeding them. Add a bit more food as more fry appear. Many breeders feed them infusoria for a few days, but I’ve found that they will take newly hatched San Francisco-strain brine shrimp (the nauplii are much smaller than Utah-strain brine shrimp), micro worms and vinegar eels right from the start. After a week or so, you can switch them from the San Francisco-strain brine shrimp to the Utah strain. After a couple more weeks, start adding finely crushed quality flakes. The young killies grow quickly, and within six to eight weeks, the young males will start coloring up. After a few more weeks, they will be large enough for you to start putting them into different tanks.

If you have built up a good rapport with the owner of your local fish store, you will likely be able to trade them for food and other supplies. The owner may be a bit reluctant at first since killies probably aren’t usually part of the store’s inventory, but donate a couple of young pairs and let them sell themselves. The store will likely be calling you for more. If you reach this point, congratulations! You’ve completed another successful adventure in fish breeding!