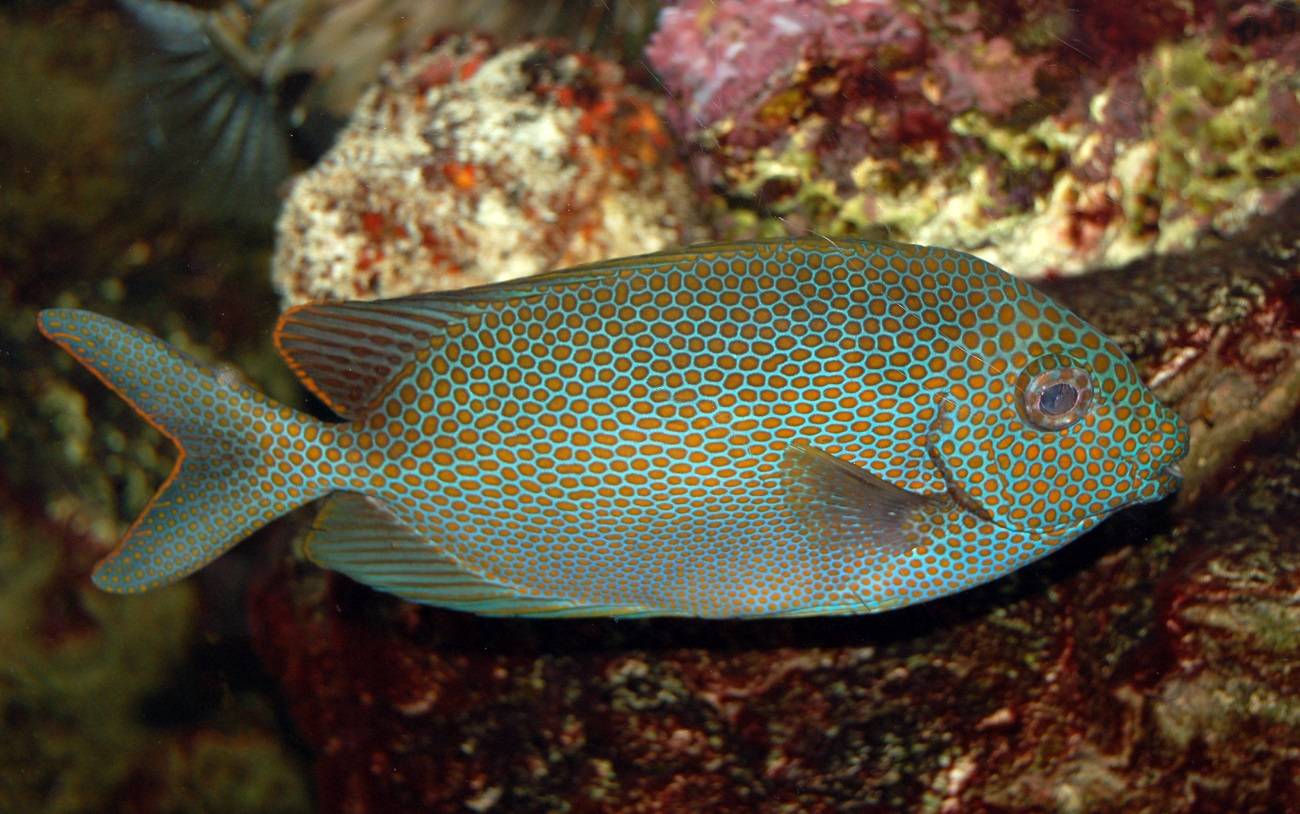 Rabbitfishes are some of the best algae-eaters for a saltwater aquarium. Most are hardy and disease resistant, and some of the rarer ones are absolutely gorgeous.

The Gold Spotted Rabbitfish (Siganus punctatus), also known as the Gold Spotted Spinefoot, is a reef-associated, tropical marine fish from the western Pacific. This species can be found from the eastern edge of the Indian Ocean south to Australia, throughout Indonesia and up into the South China Sea. Many individuals that make their way into the marine aquarium trade are collected from the Coral Sea. Further to the west, the Gold Spotted Rabbitfish is replaced by the closely related Brown Spotted Spinefoot (Siganus stellatus).

In the wild, the Gold Spotted Rabbitfish is found on seaward reefs, where it feeds, as all rabbitfish do, on benthic algae. Younger fishes are found in shallow estuaries and often travel in large shoals. As the fish matures, it pairs off and inhabits coastal reef zones up to 120 feet deep. The coloration and markings of this fish change with age. Younger fish have a brown patch straddling their lateral line that dissipates as the fish matures. The coloration of the adult fish is absolutely stunning with numerous gold spots over a blue field. Anecdotally female Gold Spotted Rabbitfishes are somewhat larger than males of the same age. Females’ coloration is also said to be not quite as vibrant. This fish, like all rabbitfishes, will change color based on its surroundings and comfort level.

Like most rabbitfishes, the Gold Spotted Rabbitfish needs room to swim and several caves in which it can hide. This is one of the larger rabbitfishes commonly available in the marine aquarium trade and can grow to 16 inches. Plan on having at least a 150-gallon tank for an adult.

This fish is an algae-eating machine and is happiest in a mature aquarium with plenty of live rock. Supplement the fish’s diet with herbivorous foods and meaty treats such as krill, raw table shrimp, squid, clam, and mussel. Keeping all rabbitfishes well fed (e.g. several feedings a day) will go a long way toward keeping them uninterested in eating your coral (especially soft and leather corals and corals with large polyps).

Generally peaceful, the Gold Spotted Rabbitfish is usually left alone by more aggressive fishes as a result of the rabbitfish’s venomous spines. The aquarist should also take note of these sharp spines. Do not keep two rabbitfishes together unless a mated pair can be obtained or unless the aquarium is very large (hundreds of gallons).

All in all, the Gold Spotted Rabbitfish is a beautiful fish that adapts beautifully to aquarium life. Somewhat shy compared to other showy tropical marine fish, this rabbitfish is nonetheless a definite eye-catcher and a fantastic tankmate for most other fishes (with the exception of other rabbitfishes unless they are a mated pair). If you plan to buy one, you should look for a smaller fish in the three inch to four inch range. For a fish that size, expect to spend around $70.