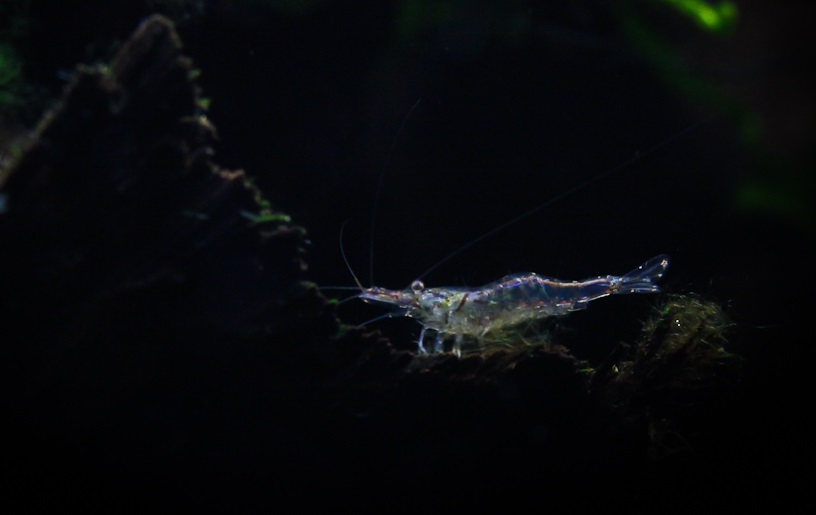 Known to the scientific community as Palaemonetes paludosus, the freshwater ghost shrimp are often sold as food for cichlids and other carnivorous fish. But these fascinating creatures can also be wonderful and very rewarding members of a community tank. In fact, many hobbyists love to add a colony of these unique shrimp to their tanks just to watch their antics.

The ghost shrimp no doubt owes its name to the fact that it is nearly invisible. The clear coloring of these shrimp is certainly an advantage in the wild, and these creatures are prevalent throughout the south, in waterways as small as drainage ditches.

Two of the advantages of the ghost shrimp for the community aquarium is their small size and their non-aggressive nature. The full-grown adult ghost shrimp is rarely more than an inch and a half long, making it the perfect choice for community tanks. It is however important not to house ghost shrimp in breeding tanks, as they will be able to eat the fry. But once those baby fish are over an inch in length the ghost shrimp will no longer pose a threat.

Hobbyists love ghost shrimp for their fascinating appearance, but it is their scavenging and cleaning ability that is most important. Ghost shrimps will spend most of their time scavenging the bottom of the aquarium for overlooked food and other morsels, and this natural behavior makes them an excellent choice for keeping the tank clean and free of uneaten food particles. These shrimps will also readily swim to the surface at feeding time, and many hobbyists love to watch them compete with the other fish at meal time.

What Do Ghost Shrimp Eat?

These shrimp feed readily in the community tank, and their non-aggressive nature means that they will not battle larger fish for food – at least not for long. These shrimp can eat just about any kind of commercial fish food, so hobbyists can continue with their regular feeding regimen after acquiring a colony of these litter cleaner-uppers.

But although glass shrimps are excellent general tank cleaners, they should not be relied upon to remove algae from the sides of the tank. Algae is definitely not a favorite food among the shrimp crowd, and if other food is available they are likely to ignore those green growths. They will, however, use those algae to gain a foothold on the glass. Ghost shrimps love to walk up and down the aquarium glass in search of tidbits, clinging to the algae with their tiny feet and using it as a kind of ladder.

It is possible for hobbyists to breed ghost shrimp, but it is best to move the egg-laden females to their own maternity tanks – the other residents of the community tank will happily scoop up all those tiny shrimp. Unless you want your newly hatched shrimp to become a tasty treat for the whole tank it is best to isolate them until they are large enough to survive with all those hungry mouths around.

The ghost shrimp is undoubtedly a fascinating creature, and it is a welcome addition to just about any community tanks. Their legendary cleaning ability will make them a welcome sight, and hobbyists will love watching them interact with the other residents of the tank.

Other types of shrimps for your tank: