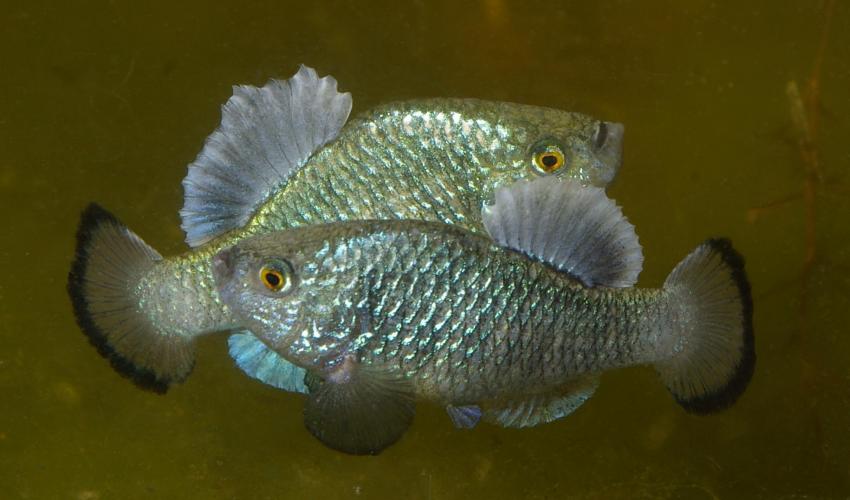 For some time I have long had an interest in Desert fishes and recently had the opportunity to obtain a small colony of Cyprinodon lonigdorsalis.

This small Mexican pupfish was only just recently described in 1993.
By 1998, it was extinct from its home in Nuevo Leon. This fish originally inhabited a small pool of water that was spring-fed, due to groundwater use and overexploitation the pond dried, and all fish were exterminated.

Luckily someone had to foresight to take a few of these fish for study, in doing so it saved the species from total extinction.

Small fish, up to 1 1/2 inches long, body shape is rhombic or diamond-shaped. Mature Males are brightly colored with a deep blue body, Long dorsal fin with white margins, Caudal fin has a black band on the posterior half . Females have a yellow-brown body with darker bars across the side, shorter dorsal fin with a pronounced Ocellus toward the rear of the fin.

The substrate is Coral sand with a few rocks arranged to define territories for the Male fish, a few clay flowerpot halves and a very dense growth of algae that provide cover for the Females.

Filtration is achieved by using a small sponge filter. Being a desert fish the water must be very hard and salty, I mix 3 tablespoons of marine salt per gallon and also add 1 teaspoon per gallon additional Magnesium salt (Epsom). This formula roughly brings the water to salinity of around 1.012. This is allowed to fluctuate.

Pupfish by their very nature are extremely hardy fish and can tolerate massive fluctuations in the environment. The temperature range for these fish can fluctuate drastically during the course of a day.

Pupfish are vegetarians by design so must be fed heavily on algae-based foods. Feeding about twice a day with a high-quality algae flake and allowing the tank to become overgrown with algae works very well, an occasional feeding of live brine shrimp and bloodworms rounds out the diet. Water changes should be frequent but small, the water used to replace the old should be mixed with the salts and allowed to sit for at least 1 day or longer.

These fish are best flock bred with 3 females to every male, it is desirable to have at least two males per tank. Pupfish are unique to the killifish world as they perform a sort of unintentional nest guarding, The males defend a portion of the territory they think the females would like best. Often this is a thick patch of algae or a small pile of rocks and debris.

When a female chooses to spawn, she will pick the male with the best grounds and brightest display. Males constantly display to females and other males,
Males harass the female fish so badly if they enter the territory that she can not do one thing: eat the previously laid eggs and fry. Fry and young fish are ignored by defending males.

Spawning as with most killifish is not problematic and easily done, getting the eggs to hatch is not as simple. I do not remove the eggs as some who work with this fish do, the reason being, I seem to not have anymore fry hatch than by leaving them with the parents.

On average, I get about 1 in 10 eggs to hatch out viable fry. One colleague has told me that he has much better luck raising these fish outdoors, in thick scummy water. He surmises that the oxygen-rich water during the day and the anaerobic conditions at night may have something to do with egg development. This is an interesting idea and one I’m currently researching. Some research on Cyprinodon diabolis (Devils hole pupfish) seems to prove this may be very important indeed.

It is unfortunate that this fish will never again see a home in the wild due to man’s interference, but equally fortunate that man is trying to not lose the fish for good by carefully managing captive populations. This noble cause however is counterproductive with the conditions just getting worse for desert fishes, the management and protection of the natural habitats of these fish needs to be the focus rather than captive care.

I have found these fish very rewarding to keep and observe, much is still left to learn about this little fish so this short article is but one of many to come.