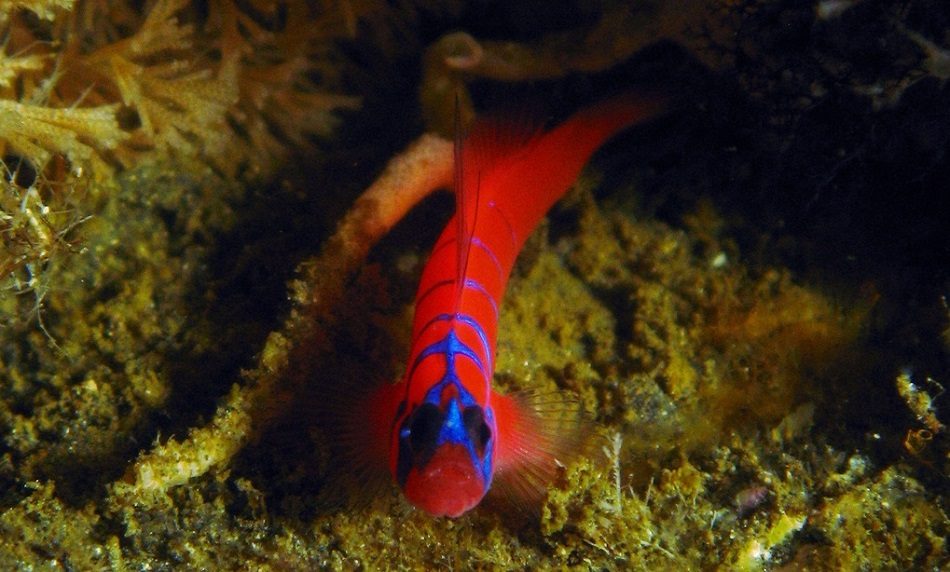 The Catalina Goby, also known as the Blue-Banded Goby, is a very popular saltwater aquarium fish native to dense kelp forests in the Eastern Pacific Ocean. Its natural habitat ranges from the Gulf of California, Mexico to Ecuador and northern Peru.

It is found in deep (around 76 m) coastal waters and utilizes small rocky caves, tight crevices, and the spines of sea urchins to hide from larger predatory fish.

The Catalina Goby is considered one of the most beautiful aquarium fish and it’s easy to see how: it has a bright red body with a vivid blue mask and vertical stripes on the front half of its body, and the tail has a yellow tint.

Males have a very dramatic eyespot on the dorsal fin. The body is covered with rough scales but scales are absent on the head, nape, chest, and pectoral-fin base.

It’s a fairly small fish, only reaching lengths of about 7 cm.

This fish is a shy bottom dweller and usually rests near the bottom of the tank, hiding in caves and crevices most of the time. The Catalina Goby should ideally be kept in temperatures between 71 and 74° F, a pH value of 8.1 to 8.4, and a specific gravity of 1.020 to 1.025.

When kept at the appropriate cooler temperatures this fish is very hardy and disease resistant, however, it becomes quite a disease-prone species and will have a short life span at higher temperatures.

A single specimen can be kept in a 10-gallon tank, and a 30-gallon tank should provide enough space for two or three to establish a territory.

The aquarium should have highly oxygenated water along with plenty of rocky caves and crevices to hide. If this fish is not provided with hiding spots it will likely become stressed which causes paler coloration and increased susceptibility to disease.

When provided with the appropriate conditions this fish should live about 2-3 years.

In the aquarium, the Catalina Goby accepts almost any small, meaty prepared or frozen food. Their diet can include frozen Mysis shrimp, Cyclops, Daphnia, and vitamin-enriched Brine Shrimp.

They also accept sinking pellets or flake foods. They should be fed twice per day.

The Catalina Goby can be quite territorial with other members of its species but it is peaceful with other fish.

If they are maintained in a large enough aquarium (at least 30 gallons) Catalina Gobies can co-exist with most other fish species as well as members of its own. However, care should be taken if you plan to house them with other gobies.

The Catalina Goby also co-exists well with both temperate water corals and invertebrates like Anemones, Feather Dusters, and shrimp.