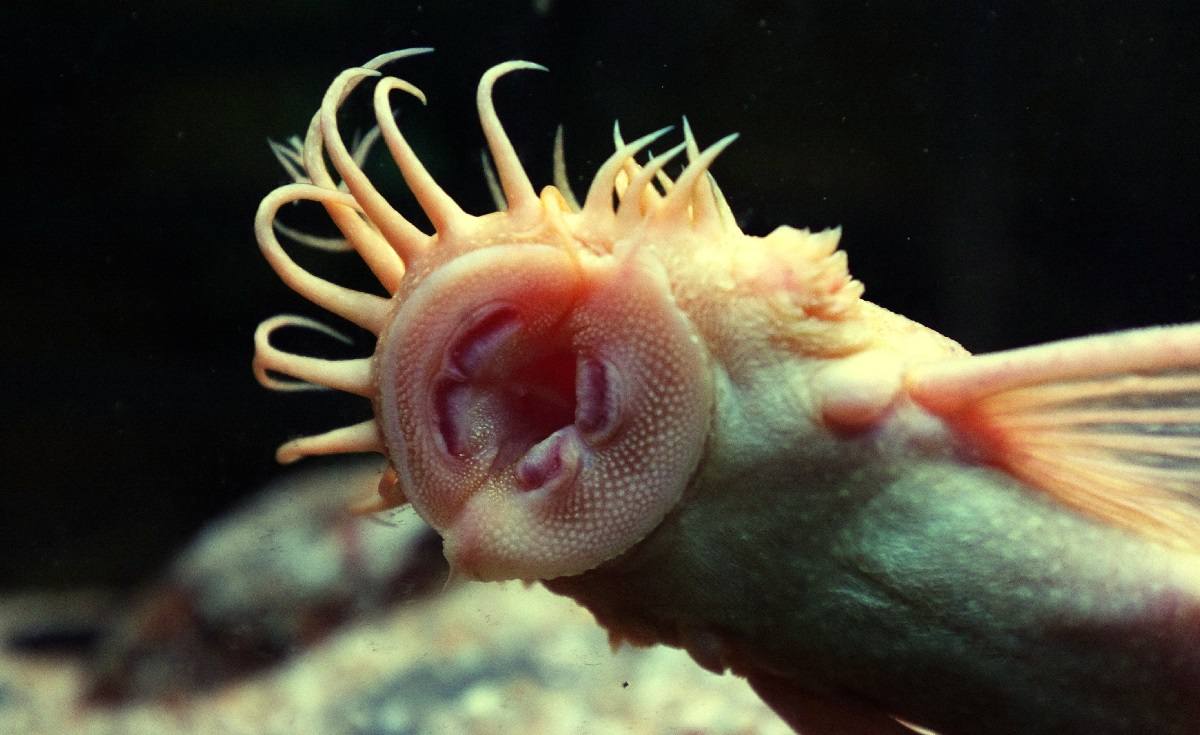 Most people think that sucker-mouthed catfish species of the family Loricariidae are ugly, but these fishes become acceptable, even handsome, with familiarity. There are good reasons that plecos have become a mainstay of the catfish collections of those hobbyists who tend to specialize in catfishes and loaches.

Within the family Loricariidae are the fishes of the subfamily Ancistrus, that has the face full of unbelievably ugly tentacles, making the fish look for all the world like Medusa of the ancient Greek legends. It will be remembered that the lady was so ugly that one look would turn a man to stone. Part of her hideous appearance was that instead of hair, she had a plethora of snakes that grew from her head. Is it possible that fish with an almost similar ugly appearance could attain a following among tropical fish hobbyists? Not only is it possible, but it is a done deal – and there are plenty of good reasons for the popularity of these admittedly hideous fishes.

First, we must face the facts about plecos. They have their drawbacks. One of these is that many species get to be from 15 inches to two feet in length. Also, most of them are difficult to spawn. One reason for that is the size of the fish itself, but another is that the male often digs a tunnel for depositing the eggs in the soft banks of a river. It is difficult to accommodate such behavior in the aquarium. It is because these fishes do such a good job of cleaning up algae that they have wormed their way into the hearts of many aquarists.

They are quite interesting catfishes, too, being some of the few fishes that have an adjustable iris on the eye. A turning point in the popularity of these quite amazing South American catfishes was when hobbyists began to realize that they weren’t the phlegmatic species that they always seemed to be. Rather, they were nocturnal species that were active at night. By the use of red light bulbs, these fishes could be tricked into thinking it was nighttime, and it turned out that these guys had quite interesting behavior, even fighting with one another at night over feeding territories. But, of course, there was still the size problem and the difficulty with breeding the species. Enter our lovable monsters.

The bristlenosed catfishes, Ancistrinae, it turns out, are generally small species, ranging in size from 4 inches to about 8 inches. Further, the male usually selects a hole in the rockwork or under a piece of driftwood and will court females from there. Hence, not only are these catfishes of a suitable size for the home aquarium, but they can also be spawned in home tanks. Who could ask for more? A little less on the ugly side? After a while, these fishes are so ugly they are cute. This is especially true as you get to know them.

What do these plecos eat, anyway?

Like most of the other plecos, members of the genus Ancistrus are herbivorous. In fact, they will clean up much of the algae in their tank in one night. So much for free food. After that, we must supply dry and frozen foods that contain plant matter. For that matter, we can utilize bits of kale and romaine lettuce to supplement the diet. In my experience, it is not even necessary to scald the lettuce to help break down the cellulose. The catfish have digestive systems for dealing with hard-to-digest substances. In fact, many hobbyists keep a bit of driftwood in the aquarium for the fish to ingest. It is believed that the lignin and cellulose they get from that source aids in their nutrition and possibly digestion. Having said that, however, I should mention that I have known numerous hobbyists who raised and spawned species of Ancistrus on dry food, including spirulina disks. Ichthyologists generally believe that all species of fish start out life as carnivores, specializing with maturity in some species to herbivory, even growing a longer alimentary canal in the process. Either bristlenoses are exceptions in that regard or the young are able to discover small prey that feeds upon plant matter. In any case, the young do not seem to be difficult to raise. As is the case with most plecos, the bristlenose pleco is difficult to identify. There are believed to be about fifty species of Ancistrus, with A. dolichopterus being the most common. The species vary from one another in size, shape, and in number and types of bristles. In some species, the female lacks the facial growth or has only a modest amount. This brings up the point of the purpose of the growths. It has been hypothesized that the bristles help the fish determine the current and direction of the water flow, as well as enhancing the sense of smell. A further speculation is that it is a female selection trait. In other words, the males have the bristles because the females prefer them. (This would be similar to the peacock’s tail, and it can turn into a runaway trait, as the females who prefer the trait are also perpetuated, or at least their genetic material is.) In all fairness, it should be said that the last explanation of the bristles is probably the least supported by ichthyologists.

Unlike many other Loricariidae, bristlenoses actually prosper in hard and alkaline water, as they range even into brackish waters. Like most plecos, though, they are quite adaptable as long as the water is kept clean. The only counter indication with these little fishes is the undergravel filter. If used, it should be one of the reverse-flow types, so that the debris filtered out is not concentrated in the gravel. These fishes seem to prosper in water kept at 72 to 78 degrees F, even spawning in the lower range.

If your inclination is toward spawning these fishes, the first step is to obtain several specimens, five to six, for example. This way, you can allow them to grow up and spawn naturally. You should have lots of rockwork in cave formations, and a little driftwood would certainly not be a bad idea. Make regular partial water changes. The more heavily you feed, the more frequent should be the changes, but about 25 percent per week should suffice. Remember that these fish will be at their most active at night, so it is a good practice to place some of the food in the tank just before the lights go out. If you are interested in observing your charges as they behave in the evening hours, use a red bulb (or a red sleeve that fits over the bulb) turned on at night. For this to succeed, the rest of the lights in the room have to be turned off. Although bristlenoses get quite bold about coming out during the day for food, their most active normal behavior occurs during evening hours.

It takes the male of about 15 months to attain sexual maturity. At this time, the bristles on the face may increase in density. The males stake out caves, whether in rockwork or in driftwood, and they attempt to entice females to the cave to lay their eggs. One method the male uses to attract females is to attach to the rock or wood by the mouth and slap the tail back and forth. This creates current vibrations that are easily detectable by the female. If the male is in a shallow position in the tank, he may actually create splashing noises that are detected by the rest of the family, too. In the wild, several females may lay eggs in a male’s nest. Courtship consists of the male trying to nudge the female to his nest and nudging the female on the sides while she is in the nest. Once the adhesive eggs are laid upon the walls of the cave, the female is dismissed, and the male takes over guarding and cleaning them. He uses his mouth to clean debris from the eggs. The eggs hatch in about five days and the young drop to the substrate. The male guards the young, even covering them with his body and fins. It takes about four days for the yolksacs to be absorbed and the young cling to the sides of the bottom by means of their suckerlike mouths. Tiny bits of food can be added at this time, but the emphasis should be on the vegetative types of foods. The young will take meaty foods, but hobbyists have reported large-scale deaths from an all-meat diet.

With large-scale breeding of these “little monsters,” albino and semi-albino forms have become popular. These are okay, I suppose, but I am one of those purists who prefer my fish as they occur in nature. I only mention the albino forms so that you will not be surprised to see them in fish shops.

Albino or wild-type coloration, the bristlenosed plecos have much to recommend them. Their appearance may take a little getting used to, but there will undoubtedly come a time that you will be amazed that you ever thought of them as anything other than cute – or, at the very least, handsome.