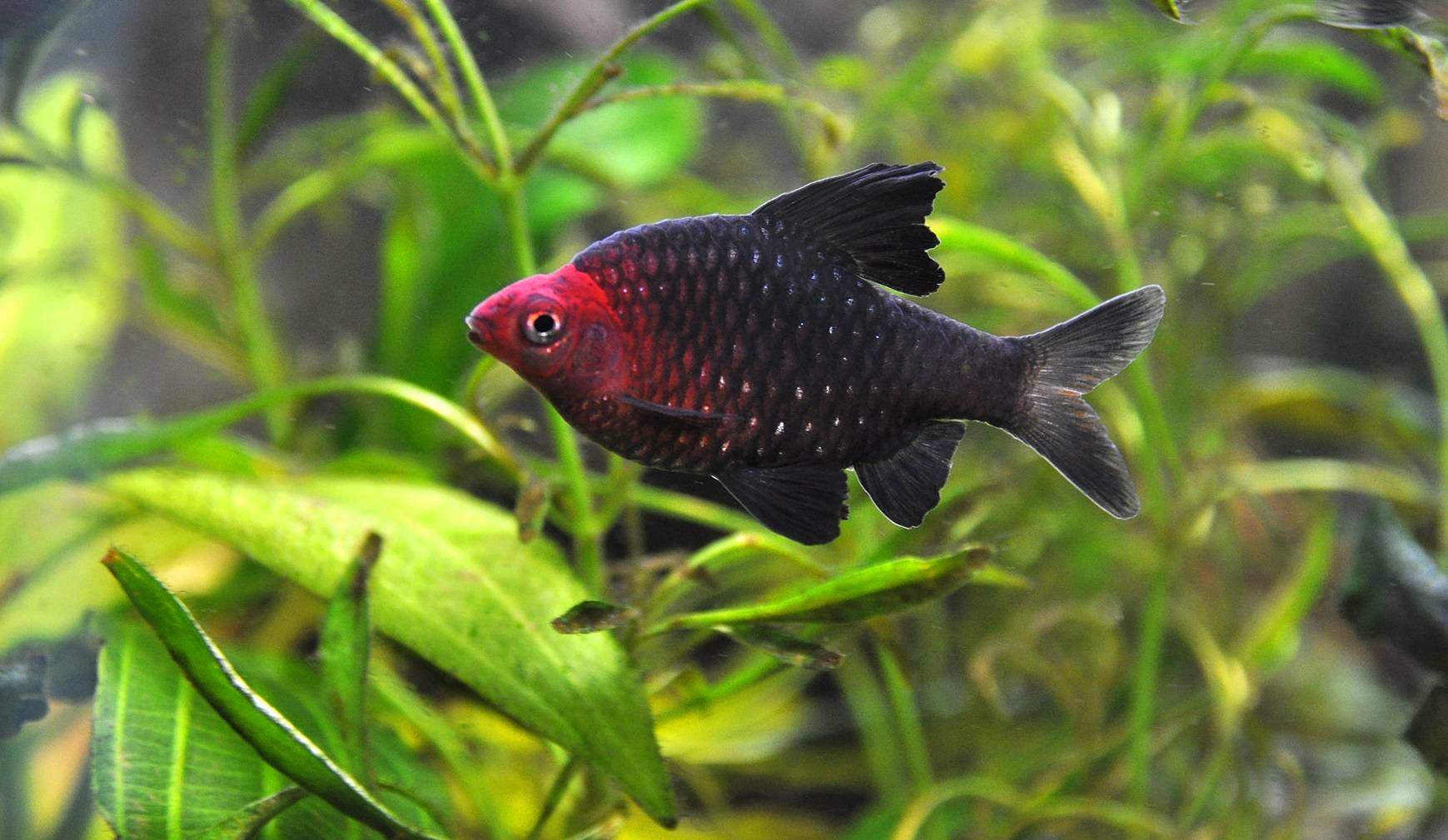 Sometimes I think it’s a shame barbs are not:
A) Difficult to keep and breed
B) Very expensive to purchase

If those two things were true, then barbs would not be so under-rated as aquarium fish.

If you believe I’m overstating this phenomenon, let me share this anecdote. A good friend of mine (an experienced aquarist) observed some black ruby barbs swimming in my living room aquarium a few years ago. They were adults, and the males had reached their beautiful dark raspberry-red breeding coloration. “What did you do to get them this color?” he asked. When I replied I did nothing special, and that they simply become beautiful when they reached maturity, he accused me of lying!

Since the black ruby barbs he’d seen in pet shops were immature and therefore were not in their prime color, he assumed I must have done something special to get these “plain” fish to look so attractive.

Nearly all the barbs one encounters in pet shops have the same problem: They are nothing to look at until they reach maturity. Once they do, they become so attractive it’s difficult to imagine they are the same fish.

Setting Up a Barb Tank

Here’s what you’ll need for setting up your tank:

I have kept a tank exclusively for barbs for at least four years. Those tanks ranged in size from 29 to 90 gallons. And, importantly, all were heavily planted. Barbs and plants go hand-in-hand, contrary to what you may have heard. The only barb I’ve seen eat plants was the clown barb, Barbodes everetti – and even then, it was some soft-leafed water sprite. Plants with tougher leaves, like Vallisneria, are generally unharmed.

Besides their beauty and compatibility with plants, the behavior of barbs is something to behold. Cichlid fanciers rave incessantly about the interesting actions of their fishy charges, yet many of those same characteristics can be seen in barbs. I have observed tiger barbs locking jaws almost like cichlids.

In fact, the active courtship rituals of most barbs are interesting to watch. Barbs generally scatter their eggs among plants and on the bottom of the tank.

Barbs are in the family Cyprinidae, the largest group of fishes extant, and the group which comprises the carps and minnows, and includes the common goldfish, rasboras, and danios. Cyprinids do not have an adipose fin, nor teeth in the jaws – two characteristics which help distinguish them from the tetras. Instead, barbs have grinding teeth and/or a bony plate on their pharyngeal bone which enables them to crush their food.

Barbs have a reputation for chewing on the fins of angelfish and other long-finned species. Since I’ve never had the desire to mix barbs and angels, I can’t comment on this. However, I often mix barbs with danios and loaches, and I’ve seen only minimal aggression between the different species.

They are largely omnivorous, and dried commercial flakes are eaten with gusto. I like to give mine an occasional treat of bloodworms, mosquito larvae, white worms and brine shrimp.

I alternate these 3 and my cichlids love them all.

The majority of the barbs of the aquarium hobby come from Asia, with a few from Africa. There are no barbs in South America, where that niche has been taken over by tetras, nor in Australia, New Guinea nor Madagascar.

I must stop here and mention there seems to be some confusion as to the Latin nomenclature of barbs. Some authors classify them all as Barbus. Others break the family up into Puntius, Barbodes, and Capoeta. I’m going to do my best to keep them straight, but it’s largely a guessing game for a layperson like myself.

Also, I should mention I have never liked the cyprinids which get too large for most home aquaria, such as the foot-long tinfoil barb, Barbus schwanefieldi, or the bala shark, Balantiocheilus melanopterus. This article will not address those large cyprinids.

My favorite barb is the common Tiger Barb, Capoeta tetrazona. It is one of the best schooling fishes, and always provides the foundation for my barb aquariums.

There are far too many barbs to write about them all here, so I’ll just touch on a few more of my favorites:

The Striped Barb, Puntius johorensis, is one of the more unusual barbs. Reaching the length of nearly five inches, this fish has black horizontal stripes on a yellow background. I’m not certain about this, but I believe these barbs take the cichlid-like approach of pairing off and eventually killing the other striped barbs in the tank. I do know that when I keep an odd number, only a male and female survive.

Cherry Barbs, Capoeta titteya, have everything going for them. Small, with a beautiful cherry-red coloration, they are peaceful, long-lived and school well.

The Gold Barb, Puntius semifasciolatus, are perhaps the most underrated barb of all. I don’t know how many times I’ve been asked, “What’s that pretty, yellow fish?,” only to surprise the inquirer by telling them it is the plain, ugly little barb they see every time they go to a pet shop.

There are so many man-made varieties of the Rosy Barb, Puntius conchonius, it’s hard to pick a favorite. I like the bright red, long-finned variety. However, the recently-imported golden yellow variety is also quite attractive.

I’ve already mentioned the Clown Barb, Barbodes everetti, as a potential plant eater. Of all the barbs I’ve kept, this one needs the most heat and is the most likely to get sick if chilled. It is one of the larger barbs, and when mature, resembles a four-inch version of a koi.

The Arulius Barb, Barbus arulius, is what I consider to be the discus of the barb world. It is a seldom seen, four-inch beauty with a purple sheen and vertical black bars. Males have a dorsal fin that sports filaments which extend nearly to the caudal fin in older specimens. It can be kept in groups.

I’ve barely scratched the surface of all there is to know about this readily available group of fishes, but it’s not hard to tell I’m a big fan of barbs. I invite other aquarists to begin looking at them more seriously. After all, we need to start keeping something besides African cichlids, angelfish and discus!